View Our ServicesContact Us

For those wanting to update their home, gray and greige are definitely two of the most popular choices. But with the thousands of colors out there, where do you even begin? Well, with the help of Blue Dog Pro Painters, expert painters in Dallas, Texas, we can look at the top 10 best Sherwin Williams gray paint colors. 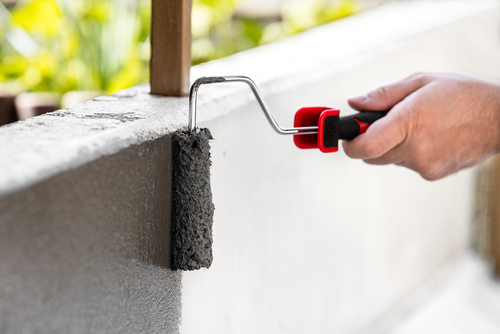 Whether you’re preparing your home for sale or living in it, Repose Gray is the perfect paint color for almost any room. Repose Gray is a light gray that has SUPER subtle brown undertones with a wee dab of purple. There’s not enough brown to qualify it as a greige, but enough to add softness and stop it from falling icy cold.

With an LRV of 60, Repose Gray is a light color, but a ‘heavy light’, as it doesn’t have the bright feeling you’d expect in a typical light paint color. It will hold itself nicely in a well-lit room, brightening up, but can look drab in a darker, shadowed space.

Ellie Gray is a beautiful cool gray with stormy blue-green undertones. These undertones mean it’s not a fresh gray paint color but has more of a cool stormy approach. It’s a soft and calming gray with a nice visual weight to it and a brave choice if you’re looking for a gray with a bit more body!

With its LRV of 39, Ellie Gray will add depth and personality to a room. And while it is a cool-toned gray, the depth can add a warm and inviting look if you have the right bulbs for the job!

Tinsmith is a light-medium gray with cool, but not icy cold undertones that can flex slightly blue. Check out the shift when the light’s turned on/off…

Tinsmith has an LRV of 57, so it’s tucked nicely in the light-medium range. If you want less undertone, check out Sherwin Williams Sweater Weather.

Silverplate is a slightly cool gray that hits JUST the spot when you’re looking for a gray that isn’t too ‘this’ or too ‘that’.

With an LRV of 53, Silverplate might be heavy for a dark room, but looks sharp, clean and inviting in a reasonably well-lit room, especially with cool bulbs. It is like Tinsmith, but stormier looking and slightly more likely to flash blue-green (but favors blue).

Big Chill is one of my favorite slightly cool grays. It has a wink of a stormy blue undertone, so it’s not an icy/blue type of color–it’s calmer than that. Compared to the ever-popular Benjamin Moore Gray Owl, Big Chill has far less green-blue undertone, making it look more like a ‘typical’ gray.

The LRV of Big Chill is 62, so it’s classified as a light color. It’s the perfect depth when you want a color that holds itself well in slightly darker areas but doesn’t wash-out completely on well-lit walls.

Pavestone is a soft, warm gray-greige. It easily picks up a soft, subtle green undertone, especially on exteriors.

With an LRV of 32, Pavestone might be a bit much for a north-facing or dark, shadowed room. However, in a well-lit space, it’s a stunning, almost medium-toned neutral with an organic-looking, earth-toned base.

Dorian Gray is one of the more popular grays with a bit more depth/value. While more traditional grays lean to the cool blue or green side, Dorian Gray has a willy wink of warmth in it, offering a softer, more subtle look. While it can pick up a touch of green, it sits in the violet end of the undertones, but even then, they’re subtle.

Dorian Gray is a beautiful choice for any reasonably well-lit room. With an LRV of 39, it’s a medium-toned paint color, but when paired with the right white, the contrast is wicked gorgeous!

Worldly Gray is a beautiful warm gray-greige with a subtle green undertone.

Worldly Gray is the lighter version of Amazing Gray. Both colors can pick up a subtle green undertone, so if you’re sensitive to green (even on the most passive scale) read about #10 instead.

Colonnade Gray is one of my favorites and in fact, I used it in our last home. Hated the home, loved the color!

Colonnade Gray has an LRV of 53, so it’s firmly in the light-medium range. This means it could be a touch dark for a dark room or hallway. As for undertones, Colonnade lightly favors green, but can EASILY flash into any of the cool undertones.

While Worldly Gray and Agreeable Gray are very similar to each other, they aren’t quite the same. Both are trying to sneak into the ‘greige’ world as they have far more beige in them than the average gray, however, Agreeable Gray has slightly more flexible undertones (while only mildly favoring green), while Worldly Gray humors just a bit greener, making it more greige looking. That being said, Agreeable can EASILY pick up any of the three cool undertones.

Blue Dog Painting, LLC, DBA Blue Dog Pro Painters is a family-owned and operated business serving residential and commercial customers in the Fort Worth and Dallas metropolitan areas. Our services include interior and exterior painting, deck and fence refinishing, and specialty floor epoxy coating. We are not a franchise. We are a family. And we hope to serve you and your family’s home and commercial painting needs!